Definition for Curtain Walls can be as non-structural aluminium framed walls, containing infills of glass, stone or metal panels that are connected on the building structure. They can be broadly categorized into Unitized Curtain Walls and Stick Built Systems.

The question of whether to opt for the one or the other, is a very common discussion in our Façade Engineering world. And as with most things in life, the answer “it depends”.

Let’s try to examine below the parameters that can affect this decision.

1- Façade total size. The larger the façade is, the more arguments can be found in favour for the unitized. It will mean less total cost (*under certain circumstances that we will see below) and higher speed of installation. In a typical all-glazed building, for a standard curtain wall, the borderline for a unitized system to be developed and make sense is around 5.000 m2. For less than that, stick systems tend to be preferred as they will be more economically viable. 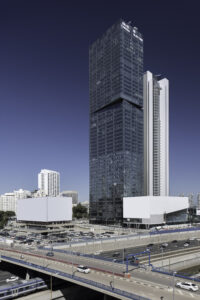 2- Repetition degree. When the height of the floor is constant and the distance between the mullions repetitive -what is called in our field as the “typical floor”-, it is sensible to break the façade into units of similar size. Prefabrication at the factory will take place, trucks will be loaded and transported to the site, installation will be completed with glass, spandrel elements and gasket, at a much faster pace than proceeding one stick at a time. Ah don’t forget, without the need of scaffolding as well.

An important advantage of unitized systems is that most of the work is carried out in the factory. This simply means better control and without possible environmental adverse conditions like wind, rain or  snow. As we all know, 80% of the mistakes, will happen on site.

3- The building planarity. If the project has flat and vertical walls, stick systems are easy to assemble. This is not the case with complicated slopes and 3-D shapes, where unitized take the lead. Unit prefabrication, assembled in the factory, sealed in the factory and interlock joints so you can allow for on-site adjustments. And when more brackets are required for external sunshades and fins, it is better to produce them in the factory as a unit system.

4- Dimensions and shapes. Unitized systems are better suited to be used in high buildings (above 6-storeys) due to the shorter required installation time. Larger panel and glass dimensions also favour unitized. This is not the case with low and extended buildings that offer an easy to access façade from outside. Actually, the vast majority of low to mid-rise curtain walls globally are installed with stick facades and there are very good reasons to do so. 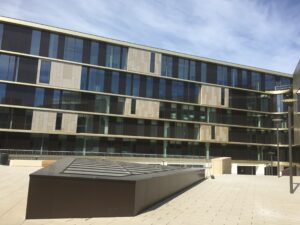 5- Building Location. Having worked in many international cities and markets, we have observed major cost differences that can affect the overall decision. Material costs present minor differences among countries or even continents. However, labour costs tend to vary heavily among countries and wages in  USA are several times multiple in comparison to wages in some Eastern European or Middle East countries. Value engineering exercises have shown us that a certain building can be more economical in USA with unitized system while an identical building in size, height, geometry and complexity can be more economical in e.g. Romania with a stick system. And by far.

We have found differences –though in much smaller degree- even within the same country, for instance a tower in New York City has different building economies versus a mid-town tower in a typical US Southern state capital.

Another issue to be addressed, is the availability and relevant expertise of façade subcontractors. It is a universal fact that the pool of subcontractors with stick curtain wall systems proven experience is much larger than the similar pool with unitized systems experience. In countries like USA, Arab Emirates or Germany, there will still be a reasonable number of bidders. But in other countries like my native Greece or Cyprus, there is no more than a handful or even none such subcontractor.

We believe that the use of unitized wall systems will increase in the coming years, mainly due to two main drivers.

The one, is urbanization. Recent studies have shown that by 2050, 70% of global population will live in mega-cities. And since land in those cities is more or less for granted, we expect to see larger and taller buildings.

The second, is the ever more complex shapes that we see in modern architecture in all parts of the world. As the number of city towers increases, so does the competition between the developers to attract the wealthier tenants and buyers. The more unique design architecture wins and the last years we have seen designs and structures that seemed impossible a few years back. 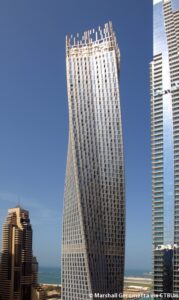 – Should I Use a Unitized Curtain Wall of Stick-Built System? W&W Glass